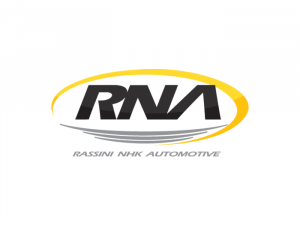 Rassini – NHK Automotive (RNA) occupies an outstanding position in the automotive spring market, where it is today the largest manufacturer of original springs in South America.

RNA’s history begins in 1932, when Fabrini, a suspension springs manufacturer, was founded in São Paulo to serve the aftermarket.
In 1957 Fabrini became a supplier of the first automakers installed in Brazil. 3 years later, Fabrini builds a 20 thousand square meter plant in São Bernardo do Campo.
At the same time Cimebra, founded in 1956 and 11 years later becoming a supplier for automakers, was acquired by Japan’s NHK-Spring, then a group with more than six decades in activity, world-wide operations and one of the largest springs manufacturer in the world, in addition to its strong presence in various other sectors such as automotive seating, industrial equipment and security and information systems.
In 1996, Fabrini is incorporated by Sanluis Rassini. This group which is based in Mexico and produces breaking and suspension systems, is an original equipment supplier to major automakers in the world and has plants all over the American continent. That was the starting point of the decision to work jointly in the Brazilian market through these two groups, forming RNA: Rassini-NHK Automotive, with two plants, one in São Bernardo do Campo in Sao Paulo state and another one in Nova Iguaçu, in the state of Rio de Janeiro, totalizing 35 thousand square meters of constructed area, built on total area of 55 thousand square meters.

RNA stands out as a global supplier present in the main automakers in Brazil and Mercosul.

With its modern and versatile industrial park and its engineers who are always up to date in regard to spring technology for suspensions, RNA develops new products with great agility, each one produced with ensured technology and quality.

RNA operates in the diverse segments of hot-rolled springs for:

RNA stands out as a global supplier and it is present in the main automakers, in the most demanding resale and installation establishments in the market, such as auto centers, auto part shops, transportation companies, spring shops, etc.

RNA has a modern industrial park and it is prepared to fulfill and exceed consumer expectations.
With the largest product mix in the market, RNA invests in technology and services, seeking to provide its customers with full satisfaction, through assured quality, the best delivery efficiency rating in the market and technical personnel trained to seek solutions, carry out training and render every type of assistance to its customers.